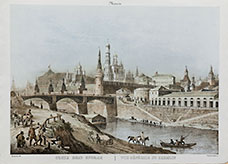 The engraving appeared in Europe during early Renaissance as a cross between various trades and fine arts: the production of printed fabrics gave a start to the woodprint, copperplate print is directly linked to jewelry and the eau forte has a lot in common with gunnery. The peculiarity of the engraving is in its mass production аs well as in its style linked to the work with hard materials. The more the engraving and lithography spread, the thinner became the borders between cultures and different art traditions. The invention of book printing is tightly connected with the art of engraving since most of the books printed in the 15th century were illustrated with the help of xylography, woodprints, and further on with etchings. The books became cheaper and their manufacturing – much simpler.

Technically the engraving is a print made on paper or another material from a wooden, metal or stone plates processed by the master and covered with paint. However, the art of engraving gave birth to more and more sorts of techniques all throughout its history. Due to its mass-production and size an engraving allows for its detailed examination and establishes a subtle and more intimate relationship with the viewer than any other kind of art.

In the east the engraving had already been known for over a thousand years when it finally came to Europe thanks to the spread of paper. At the time Germany held the leading positions in the development of the engraving art though Italy was not very far behind it, with its hero cult and antiquity worship. One of the greatest masters of engraving is Albrecht Durer who developed all the latest achievements of the German graphics known to him enriching it with Italian exquisiteness. It was Durer who turned a mere trade into a fine art.

The 16th century contributed to the art of engraving with the brilliant artist of the Dutch Renaissance Pieter Brueghel the Elder. Personally he created only one eau forte and the technical part of the restof his creations was further delegated to the famous publishing house of Hieronymus Cock in Antwerp. Curiously, Rembrandt turned to be a true genius of the eau forte; he was engaged in their production all his life and basically determined all the general styles of the art for centuries ahead.

In the 18th century Spain came to the foreground of the art of engraving represented by Francisco de Goya. His engravings stand out as a unique legacy for the country where printed graphics did not use to be as developed as in other European countries.

In the 20th century the engraving served as a tool in the propaganda of the ideas of freedom as well as in political journalism, including those created in the USSR where it was widely spread across a variety of art schools and styles.

«Quarta» gallery offers you a wide variety of original art prints from old engravings by well-known and unknown artists of 18 – 20 cc. In particular, magnificent views of Moscow executed by Jean-Victor Adam, French artist and lithographer whose best artworks are presented in Versailles gallery. Another famous Frenchman, André Durand, known both as a lithographer and a traveler, visited Russia in the middle of the 19th century funded by the entrepreneur Anatoly Demidov who was living in Europe at the time. As a result of his voyage he produced an album of 100 lithographs made from nature “Picturesque and archeological voyage around Russia» («VoyagepittoresqueetarchologiqueenRussie»). The remarkable accuracy and the author’s brilliant eye for detail allow for the historic research of the architectural monuments from his lithographs up till now.

Another famous Frenchman, Jules-CésarSavigny did not have anything to do with either art or lithography and became famous mostly due to his participation in the scientific expedition of Napoleon Bonaparte to Egypt in 1798 -1802. Resulting from the trip was a study «Système des oiseaux del'Égypte et de la Syrie» (The Birds of Egypt and Syria) with superb eau fortes by Louis Bouquet designed by Jacques Barraband. Savigny personally assisted with the creation of 105 unique engravings depicting birds.