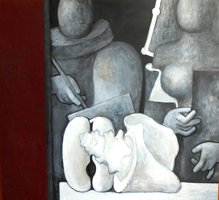 Robert Kondakhsazov’s art can be seen as a certain color-figurative text with its own system of signs, structural peculiarities and philosophical content.

The route from an object to a sign emerged in the 70s. The artist insistently painted the same objects in that period (pomegranates, jugs, lizards, shells, cypresses, stairs…), sometimes approaching the «realistic» form and sometimes becoming much more conditional. It is not rare that an object or a series of objects appear to be so abstract that they can be interpreted in two ways: mortar – keyhole, pomegranate – skull, 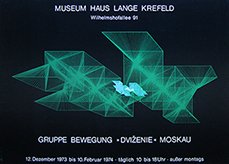 In September 1962 five young artists headed by 25-year-old Lev Nusberg founded the “Movement” group. The first participants were F. Infante, А. Krivchikov, V. Аkulinin, V. Scherbakov, R. Zanevskaya and М. Dorokhov. The movement was interpreted by the authors as change, relocation, mutual penetration, development, the state of everything that moves in both biological and esthetic sense. The important part of the project included the synthesis of various technical means and forms of art.

The posters presented at our website are part of Vietnam propaganda graphic art, which is still alive and flourishes there though in a somewhat “westernized” form. Technically, propaganda production in the territory of Vietnam split into the period before 1975, when it was dedicated mostly to Resistance and wars against two superpowers – France and the USA, and after 1975, glorifying the development of the Socialist Republic of Vietnam.

The earlier examples of propaganda posters, during the Resistance, were printed by hand from engraved woodblocks, the traditional printing technique in Vietnam. Color schemes were restricted to one, two or three tones: black on red, black and red on black and gold and red were popular combinations. In dangerous territories, where guerrilla fighters were on the move to evade the enemy, artists printed small-size posters or leaflets; in safer zones — larger size posters (120 x 80 cm). It was during the Franco- 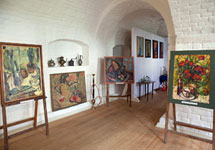 On October 8th this year at the recently renovated House&Museum Mouravieff-Apostol (23/9 Staraya Basmannaya street) there opened a chamber exhibition of the QUARTA Gallery called “Interior within Interior”.

The idea that the canvases presented at the exhibition should somehow be intertwined with the miraculous antique interior of the manor came up spontaneously, affected by the spirit of the place itself. And here they were coming alive, the dreams and visions of the

Graphic art, mastering the lifeless white space and transforming it according to your artistic ideas is, probably, the most virtuoso and versatile type of visual art.

The history of its development reflects not only the transition of artistic mentality from primitive forms of petroglyphs to the finesse of the Oriental calligraphy, but it also unambiguously points to the increasing demand of both the creator

Amazing in its unlimited power of expression this seemingly most limited artistic genre, still life (or French “nature morte” meaning “dead nature”), born within the bowels of Dutch painting as "stilleven" or "motionless model" in the 17th century, was paving its way into the Russian art for quite a while.

The rudiments of the genre can already be observed in the Old Russian iconic painting, arising in the form of few objects on canvases dedicated to canonical subjects, which

Nina Gabrielyan — a Poet, a Novelist, an Artist

A fragment from the article by the artist Yury Alexandrov about the creative activity of Nina Gabrielyan. 2007. Translation by Evrika Allaverdonts

Mural painting is artwork on architecture or other permanent base. The main technique of mural painting is a fresco which, together with mosaic and glass painting, is more frequently called monumental and applied art.

The tradition of painting walls and ceilings goes back a long time. Traces of house decoration culture