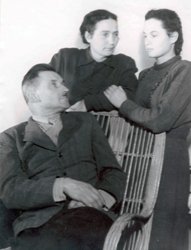 Mikhail Kuznetsov was lucky to study under the tutelage of such great masters as Kazemir Malevich and Nadezhda Udaltsova, while he finished his studies under the guidance of professor Ilya Mashkov.

After graduation Mikhail Kuznetsov becomes a member of the Moscow Artists' Society “Existence" (“Bytie"), formed yet in 1921 at the initiative of VKHUTEMAS students. Being a member of the “Existence" society and later of the “Moscow association of painters", Kuznetsov travelled a lot around the country, did a large number of sketches, worked at paintings. He went all over the Volga, was on the Kama and the Chusovaya, on Onega Lake and the Caspian Sea, on the Azov Sea and the Baltic Sea, on the Black Sea and in the Carpathians, walked all over the Moscow area– his sketches and landscapes tell us all about it.

From the first years of his membership in the Moscow Artists' Society Mikhail Kuznetsov took active part in art exhibitions. At the same time he taught at the school in Tourist settlement and ran a workshop for young painters in Yakhroma. In 1947 Kuznetsov, together with the oldest artists of the Moscow area Radimov, Shaposhnikov, Logutenok, participates in organizing the Moscow regional department of the Union of Soviet Artists. A little later he becomes a member of the board of the Moscow Union of Soviet Artists.

Art works by Mikhail Aleksandrovich Kuznetsov are represented in the collections of the State Tretyakov Gallery, Astrakhan State Art Gallery named after Kustodiev, as well as in private collections both in Russia and abroad.

Sort by Price: Low to High
24 Per Page