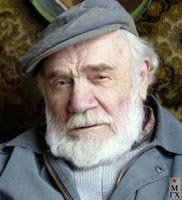 Evgeny Petrovich Bitkin was born in 1932 in Moscow. In 1957 he graduated from the Moscow Higher School of Industrial Art (named after Stroganov), where he studied under famous Russian artists Alexander Kuprin and Sergei Gerasimov. After graduation, he moved to Novgorod the Great, where he lived and worked for 6 years. During this period, he created numerous etudes, sketches and paintings, where the city, its architecture and the life of the citizens became the main subjects of the works. Novgorod land and the Russian North for many years became Bitkin's favorite places, where the artist went and worked for many years. In his works from Ladoga, Valaam, Kola peninsula we can see pristine landscapes and people engaged in their everyday work.

Since 1960 the artist had been regularly participating in Regional, All-Union and International exhibitions. In 1969, with the recommendations of Pavel Korin, Georgy Nyssky and Alexander Sukhanov Evgeny Bitkin joined The Union of Moscow Artists. At that time, he worked on monumental genre scenes, created series of paintings on industrial and Soviet historical themes. The result of artist's creative assignments all over the country from Moscow to Lake Baikal and Khiva are numerous landscape sketches and paintings.

Evgeny Bitkin is the artist of the classical traditions of the Russian school of painting, which does not prevent him from being an original artist with his own world, his own imagery and intonation. In recent decades, Evgeny Petrovich seeks to combine his love to Russian nature, the history, and the characters of beloved lands, giving them a kind of epic interpretation in his artworks. Personal exhibition of the artist were held in Moscow in 2000, 2006, 2007, Vienna (Austria, 2002), and Bangkok (Thailand, 2004).

Artworks by Evgeny Bitkin are represented in the collections of museums in Khanty-Mansiysk, Nizhny Tagil, Bryansk and other cities of Russia, as well as in private collections in Russia, France, Italy, USA, Germany, Japan and Norway.