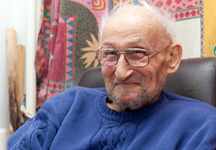 Mai Dantsig was born in 1930 in Minsk. Since his childhood he dreamt of becoming an artist though he had to obey his parents' will and study playing the violin. The desire for art ran in the family: being still a young boy his father frequented the studio of the then famous painter Grube, and the trophy of those days remained in the house: a sketch of a model created by Dantsig senior.

Mai was 11 when the war started. The family spent that trying period in evacuation in Ulyanovsk where Dantsig painted factory signs and slogans for holidays as a source of additional food and clothes. On their return to Minsk the Dantsigs discovered their apartment miraculously intact; even his father's sketch was still in its place. In 1947 Dantsig became a student of the Minsk Fine Arts College and then, in 1952 he left for Moscow to continue his studies at the Moscow State Fine Arts Institute named after V.I.Surikov, where he got into the workshop of Vitaly Tsvirko, Pyotr Pokarzhevskiy and Victor Tsyplakov.

When he came back to Minsk in 1957 Mai Dantsig, who had already become a local celebrity, worked as a teacher at the Belarus State Arts Academy. Since then he took active part in many republican, all-union and foreign exhibitions. Dantsig's diploma work «Towards life» (1958) was acquired by the Belarus National Museum of Fine Arts. Further on the Master received numerous titles and awards: in 1960 Dantsig became the member of the USSR Union of Artists, in 1973 he was awarded the title of the «Honored Artist of BSSR», and in 1995 – the title of the «People's Artist of Belarus». From 1980 he served as a professor and later in 2001 till 2011 as the head of the art department at the Belarus State Academy of Fine Arts.