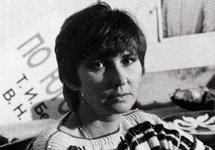 Tatyana Ivanova was born in Moscow in 1946 into the family of the famous Soviet artist Victor Ivanov who became her main teacher and mentor. However, she obtained education not in the area of art but at Moscow Textile institute where she entered the department of textile painting in 1965.

Nevertheless, easel painting attracted Tatyana Ivanova since her student years: since 1966 she started to actively participate in art exhibitions organized by the art section of the Union of Artists. In 1973 she became a member of the Moscow Union of Artists and in 1982 she was already taking part in Moscow, Russian and international exhibitions. In 1989 she joined the Creative association of women artists in Moscow “Irida” (1989).

Tatyana Ivanova worked in the genre of landscape, still life, did a few portraits. When her children were young she wrote fairy tales for the KZI (art center) and then travelled on business to remote destinations. She was rather keen on travelling and always brought beautiful artworks from her trips, even from short ones. Her creative trips to Goryachy Klyuch, Novorossiysk, Pereslavl-Zalessky, Uzbekistan, Tumen, Barnaul, Baikal (1986), Mongolia (1989), Japan (1992), Murmansk (1995) and Cyprus (1996) resulted in exhibitions dedicated to the materials brought from them — lyrical landscapes and still lifes.

The study at the Textile Institute gave her an opportunity to reveal the decorative nature of art. Ultimately Tatyana Ivanova’s art turned into a cross between these two directions: austere style, confident hand, tonal art, delight of real life and conditional, bright and light game of objects, volumes and angles, of stylization, of the happiness and peace space.

The artworks of Tatyana Ivanova are presented in the art museums of Tula, Yaroslavl, Krasnodar, Vologodsk and other art museums, as well as in private collections both in Russia and abroad.