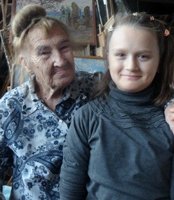 Klara Filippovna Vlasova was born in 1926 in Moscow. Since 10 years old she studied at the children's art studio attached to the Central House of Artistic Education for Children, and when she was 11 years old she received her First Prize at the First All-Union Children Drawing Contest. In 1939 Klara Vlasova entered a recently organized Moscow secondary art school, together with which she was evacuated in 1941 to Bashkiria, to Voskresenskoe settlement.

In 1943 Vlasova returned to Moscow, finished school and in 1944 she was admitted to Moscow State Academic Art Institute named after V.I.Surikov, to the workshop of famous Soviet artist Sergey Gerasimov. It was the only time when the graduates of the art school were admitted without any exams. Their professional qualities were superior to the others' since they honed their skills and mastership during the war. In the summer of 1945 there was an exhibition of students and diploma works, where Klara Vlasova presented her “Symphonic orchestra" painting. The critics noted that the work belonged to a real master.

In 1950 Vlasova graduated from the Institute and was invited to work on a narrative panel for the “Tajikistan" pavilion of the All-Union agricultural show. The artist went for sketching to Tajikistan and, starting from that trip, Central Asia became one of her favorite subjects. She travelled all around Tajikistan, Kirgizia, Uzbekistan, Kazakhstan, capturing the life and routines of other nations on cardboard and canvas. Her life was most tightly bound to Dagestan. She married a Lak, Omar Efimov, who was also an artist. She frequently went to Dagestan inspired by the beauty and magnificence of the mountains where she worked at paintings quite fruitfully. In the town of Tchokh Klara found and bought a house built at the beginning of the XX-th century, painted by a local artist, and she still goes to work there every summer.

In 2007 she had her personal travelling exhibition “Ways and Roads" in the cities of the Volga region – Samara, Saratov, Nizhniy Novgorod, and in 2012 the artist's personal show in Dagestan had a great success and she was given the title of the “National Artist of Dagestan".

Artworks by Klara Vlasova are presented in the collections of the State Russian Museum (Saint-Petersburg), the Museum of History and Reconstruction of Moscow, at the State Tolstoy Museum in Moscow, in the museums of Vladimir, Makhachkala, Sochi, Derbent, and in private collections in Russia, Great Britain, Germany, France, USA and Japan.