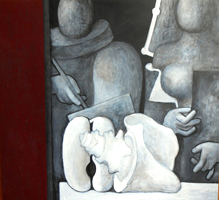 Robert Kondakhsazov’s art can be seen as a certain color-figurative text with its own system of signs, structural peculiarities and philosophical content.

The route from an object to a sign emerged in the 70s. The artist insistently painted the same objects in that period (pomegranates, jugs, lizards, shells, cypresses, stairs…), sometimes approaching the «realistic» form and sometimes becoming much more conditional. It is not rare that an object or a series of objects appear to be so abstract that they can be interpreted in two ways: mortar – keyhole, pomegranate – skull, a table with tableware – city landscape with houses etc. The main message of such artworks is that the objects traditionally perceived as different are, in fact, similar.

It was the period when the artist’s views and artistic language was being formed, which in the beginning of the 90s of the 20th century led him to the creation of paintings making up consequent series: «Hieroglyphs», «Zoomorhism», «Characters», «Realistic abstractions » and so on. At his personal exhibitions the artist usually combined them under the name of «Protoforms and artefacts». In these artworks Kondakhsazov strives to perceive and express the common basis of organic and inorganic nature, technology, culture and human psyche. This search for some kind of universals logically brings him to the minimization of his artistic language. According to the artist himself writing in the afterword to his art album «Realistic abstractions», «there are certain «protoforms» and certain «protocolors» which can express the whole integrated metaphysical picture of the world more completely». For Kondakhsazov black and white became such «protocolors». With little exclusion the artworks of that period (last 15 years of his life) have no other colors. Alongside the radical refusal to use all the color variety in favor of only two of them, which interaction – from contrasting to various degrees of mixture – according to the artist is meant to and is capable of expressing the same things as color diversity though much more laconically, he also moves from objects and figures towards signs.

It is not an accident that several of the artist’s paintings are united into a series called «Realistic abstractions». By choosing this name Kondakhsazov tries to emphasize that the base of his abstractions is not just the artist’s arbitrariness deforming objects at a whim but an urge to come closer to the reality, which he considers to be the façade of materiality, to certain primary elements and protoforms which might materialize both in inorganic nature and in biosphere, in technical sphere and in culture.

Thus, for example, the artist shows in an emphatically conditional way — as a sphere – both the head of a human and the head of an insect, woman’s breasts and the top of a flower pistil, tree fruit and some parts of technical devices of uncertain character. The same planes, cones, spheres and pipes may form a plant and a grasshopper. Meanwhile, both the thistle and the grasshopper gain certain similarity with some avant-garde architectural structures. Shells start reminding flowers and, at the same time, vases, but they also may be taken for caves and wombs. A part of a woman’s haircut can be mistaken for a shell and a flower may remind a working propeller.

The objects in Kondakhsazov’s artworks borrow details and parts from each other, as if quoting one another. However, drifting from one painting to another, from context to context, these quotes always acquire a new meaning and a new plastic content. If taken as a whole, these artworks with their structuredness, conditionalism, frequent repetitions of the same shapes and forms, evoke associations with a kind of modernized ideographic script.