Cart is empty
Cart is empty
View cart
Checkout
Home/Articles About Art/The Art of Book Illustration. Glimpses of the genre development in Russia

The Art of Book Illustration. Glimpses of the genre development in Russia 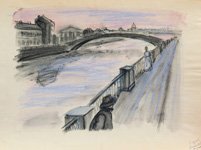 One of the amazing attributes of book illustration is the variety of genres it can be used for while being formally limited in format. Artists all over the world throughout the time have found inspiration in fiction starting from ancient mythology to Vergil, Shakespeare and Dostoevsky, trying to express eternal themes in art, frescoes, tapestry and mural paintings.

The history of book illustration is a long and winding road tightly connected, on the one hand, with the development of book printing and emergence of mass media and, on the other hand, with the improvement of graphics and art techniques. Nevertheless, technology and mastership in book illustration are not directly linked. Masterpieces in this area were created even when books were meant for the elite only, whereas in the era of massive spread of printing technology the quality of book illustrations varies greatly. The first illustrators were the Ancient Copts who decorated their prayer papyruses with exquisite pictures, Ancient Greeks who left us a few unique manuscripts and Byzantine. A magnificent example of book illustration is the Old Russian miniature which traditionally served religious purposes and was painted by the best artists of the time.

In the 15th century the German printer JohannesGutenberg invented his method of printing illustrations with the help of wooden boards which were replaced with metal ones with time, and by the end of the 18th century engraving had been superseded by lithography which cheapened the whole process of book creation a lot. Illustration, alongside the artists, started exploring not only the book space but also periodicals, which set the new tone to the whole business and created new styles in art. In 1564 Ivan Fedorov published his “Apostolos” in Moscow with the picture of Saint Lucas on the frontispiece, using an engraving of the Nurenberg artist Schoen. Since that moment book printing in Russia set quite a high standard which, in its turn, reflected on the quality of the book illustrations meant to “illuminate” the meaning of the text for the reader. Under Peter the Great’s reign the book became available to the general public but the book printing reached its zenith in Catherine the Great’s times when baroque style was already losing its significance giving way to classicism both in architecture and art. The 18th century formed certain canons in typography which made their way into the next century, and at those times the illustrations by Russian artists became not only allegoric in character but also rather exquisite in style.It was the time when book illustrations were frequently published separately from a popular book in the form of an album. One of the wonderful examples is the album with Alexander Agin’s illustrations to Gogol’s “Dead Souls” made by the engraver Bernardsky.

The 19th and the beginning of the 20th century brought forward the whole galaxy of art styles implemented in book illustrations. The illustrations for Pushkin’s “Bronze Horseman” were created by the brilliant art nouveau representative sophisticated Alexander Benois, while Vassily Kandinsky advocated abstractionism, the artistic religion of the new times. Dmitry Kardovsky used to be one of the major book illustrators of realistic tradition. His works included Chekhov’s “Kasthanka”, Griboedov’s “The Mischief of Being Clever” and Gumilev’s “Pearls”. Unlike book illustration in general, the history of children’s book illustration dates back only three hundred years. It started with folk tales and ABC books and gradually created its own fascinating world. Several generations of Russian children have grown up under the spell of Ivan Bilibin’s illustrations. With time “Bilibin’s” magic style turned into a gold canon which still amazes readers of all ages by its artistic virtuosity and taste. 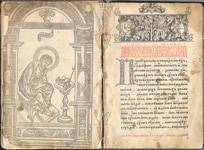 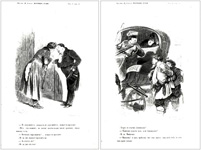 In Russia first specialized books on art were published by Joseph Knebel who used to head the publishing house of Tretyakov gallery for many years. To illustrate 50 brochures dedicated to the Russian history he invited only the most outstanding artists of the Silver Age - B.Kustodiev, А.Benois, S.Ivanov, Е.Lansere, V.Serov, Vasnetsov brothers and many others – creating a unique precedent in the history of the Russian book illustration.

A special mission was imposed on the artists who formed the style of the Soviet book illustration: D. Mitrokhin, B.Kustodiev, D. Kardovsky, V. Zamiraylo, М. Kirnarsky. The book was becoming a mass phenomenon, the cultural level was increasing and the illustration sought to find access to a large number of readers. The fine style and moving expressiveness of Mstislav Dobuzhinsky’s graphics illustrated the text of Dostoevsky’s “White Nights”. Eight black-and-white pictures laconically and precisely convey the spirit of Saint Petersburg being at the same time exactly in tune with the prose of the great Russian author. One of the outstanding book illustrators Vladimir Favorsky stated: “I do not illustrate prose; I create the book”. Evgeny Kibrik was another famous Soviet graphic artist and illustrator whose legacy includes Gogol’s “Taras Bulba” and “The Portrait”, Pushkin’s “Boris Godunov” and Ostrovsky’s “How The Steel was Tempered”. At the end of the 60s Evgeny Rastorguev, well known creator of Gorodets style, joined the army of book illustrators – he illustrated more than 100 books for “Detgiz”, “Molodaya Gvardiya” and “Sovetskiy Pisatel” publishing houses. 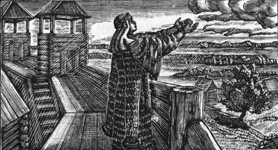 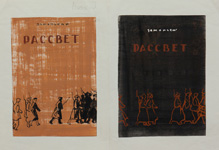 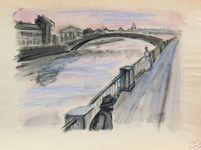 Contemporary book graphics have considerably expanded the range of artistic techniques by means of computer technology. However, the role of the artist visualizing literary images through the prism of his inner world has become even more important. Book illustration, along with graphics and photography, has turned into a collectible and is now displayed at art spaces and is researched by art critics. The images familiar since childhood evoke not only nostalgic reminiscences but also the special feeling of being part of the world literary heritage which never is or will be obsolete. Book illustration as a separate area of art can create that unforgettable magic atmosphere we lack so much in our daily life. It might be for this reason that together with art and photography book illustrations are used more and more often as an indispensable element of interior design.

Being a piece of art, book illustration combines simultaneously several important functions: it creates special cultural space in a room, increases the sense of magic the book conveys, provides irresistible esthetic pleasure and, of course, serves as a great decoration for the dwelling. Variable in style, genre and technique, book illustration can suit every taste, even the most astidious one, and fulfill many tasks in the interior, both functional and decorative.And, by all eans, it is capable of bringing across our understanding of the world in the most delicate and metaphoric way since it combines two of the greatest human achievements – the art of visualization and the art of the word.