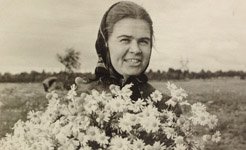 When we go to the theater to enjoy the play we barely think about details: light, scenery, costumes, soundtracks. We base our opinion on our general perception where the conclusion is either we liked it or not. But any performance is a complex of professional’s work whose intentions are creating for the viewer an ideal picture of what is happening on the scene, without distraction from the very essence of the play.

One of these professional who created this “theatrical magic” was the artist Tamara Guseva. In 1945 Tamara Guseva entered the art department of the All-Union State Institute of Cinematography, where she studied under outstanding masters, such as Yuri Pimenov, Fedor Bogorodskiy, Gregory Schegal and many others. After graduating the institute, she became a theater designer. Tamara Guseva designed several dozens of plays by Russian, Soviet and foreign playwrights in Moscow and in many other Russian cities.

Tamara Guseva was not only the designer but also co-director: made mise-en-scenes, and through the theatrical costumes conveyed her personal interpretation of the character of hero. While working on every play the artist was completely immersed in it, she was enthralled by the actor’s life on the stage, the tension and dynamism of each action, the reaction of the audience. Tamara Guseva wanted to create not only the image of each character which would take it part in the hearts of audience but to create conducive atmosphere for actors as well so they would feel free and easy on the scene. Tamara Guseva had an exceptionally difficult task: her work required exceptional efficiency and moreover a subtle flair for creating perfect image of the character.

One of the most superior performances in the Tamara Guseva career as a theater designer was the play "The Macropolus Affair" based on K.Chapek's play at the Theater of the Soviet Army, where she worked in partnership with Vera Zaitseva. During the preview in the section of the artists of the theater and cinema in Moscow Uninon of Artists, talented sketches by the the younger generation of theater designers were noticed and everyone was looking forward to the performance. The play "The Macropolus Affair" – is a sarcastic pamphlet on bourgeois reality in the capitalist countries so Tamara Guseva with her colleague had an opportunity to show their ingenious and laconic decorations ideas. Tamara Guseva and Vera Zaitseva created very special atmosphere where characters behavior seems so natural. The artists used the space and shapes, mixed colors and textures, forming the holistic image. Colors are significant in the design; they model mood which viewer has to feel. After the release of the play "The Macropolus Affair” critics noted not only the direction and actors work but the great artists’ work as well. It was said that despite the decorations laconism and limited amount of things which were used, every single detail had the universal meaning or symbol. In the conclusion critics noted the fact that Tamara Guseva and Vera Zaitseva included all possible decorations elements which is difficult task even for professionals with many years’ experience.

Tamara Guseva was multifaceted artist and an incredibly talented person: all her artworks starting from tiny sketch and ending with the decorations to the performances are diverse and profound. Unfortunately our generation didn't have an option to view those plays which Tamara Guseva worked on, nevertheless “Quarta” Gallery provides you unique opportunity to have a look into the enchanting world of the backstage and literally “touch” the theater world. “Quarta” Gallery presents costume designs for the plays: "When the Sun doesn't go down", "Recipe for her Youth", "Torrents of spring" which took place in 1960s in Soviet Army Theatre. Every single costume design is detailed, there are notes about which fabrics should be used – it shows us painstaking work behind every play. Through each sketch you can feel the character’s energy, Tamara Guseva’s extreme talent and dedication were conveyed in every casual but so accurately drawn fold of the dress or detail that completes each image, whether it's a neck scarf or a worn linen cap.