The story of One Family in graphic art by Boris Bespalko. Kononenko Family 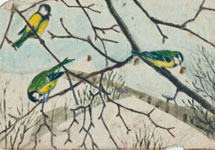 The story of any country consists not only from events which we study at school and university or hear from the news. The history is formed from the cultural heritage, memories, photos and documents which were left by previous generations, and the most important, from human destinies. Sometimes even the story of the life of one family can tell what is left behind the pages of the textbook.

The head of Kononenko family was Alexandr Alexandrovich Kononenko, the last director of gymnasium in Novgorod-Seversk and the director of 7-years school. Alexander Alexandrovich was a respected citizen and the whole county knew him. His familly was big: his mother, wife, three children, three brothers and six sisters. Ther family was intelligent, close-knit, friendly; love and support always were priorities there. Almost all girls could finish the female gymnasium and had the right to be teachers in junior classes: in the diplomas it was written “the daughter of a nobleman”.

The revolution of 1917 and the civil war that followed it invaded a measured way of life and destroyed family traditions, radically changing the fate of all members of the family, who had to run from their native places, hopping literally on the last train. There are brief memories of some family members where you can see how tragically the history can affect on people: taking lives and dividing families.

In the spring of 1917 Alexandr Alexandrovich was elected by city public to be the head of male gymnasium. The family moved to the huge director’s house close to the gymnasium. There was a big living room with grand piano, dinner table and plenty vases with flowers. Kononenko’s house was always full of guests and piano sounds, songs and romances, you could hear exciting discussions, poems and caricatures were invented, guests with family played improvisations. The times were harsh: The Revolution, the Civil War, German Occupation, typhus and hunger. Despite all these people didn’t loose their optimism, even if sometimes there was only the plate of porridge for dinner. With samovar, of course.

Kononenko’s sisters got married but lost their husbands due to the war and came with babies back to the families. So Alexandr Alexandrovich had three more children besides his own: nephews called him “father” and he was father for them indeed.

Olga Alexandrovna (1887 – 1944), was one of the Alexandr Kononenko sisters. She was the oldest one, had eventful but complicated and tough life. Olga was wise, intelligent and responsible person, with extreme desire to live. Since 1908 Olga was working as a tutor in Lodzinskiy boarding school and later in 1911 – 1912 in private gymnasium. Her husband was Fedor Mihaylovich Bespalko, accountant, and in 1914 their son Boris was born. But this family had tragic destiny: The First World War had started and they moved to Novgorod-Seversk, soon her husband got sick – tuberculosis, he died. Boris had fatal diagnosis – leukemia. All his childhood and youth Olga had to fight for her son’s life and working full time as well. Boris was extremely talented child: he was good at playing piano and painting. After he finished the school in 1930 his mother and him moved to Malakhovka, not far from Moscow to reunion with their family. Boris entered the Moscow State Technical College of Fine Arts in memory of the 1905 U. He studied design creating series of graphic works – a humorous chronicle of everyday life of his family. Unfortunately, he was affected by his disease and died very young in 1932.

It was a terrible blow for Olga, she lost her beloved husband first and then her son. She gave all her strength to work and study, at the age of 45 she entered the Moscow Pedagogical Institute for the specialty "Mathematics", she lived only for her brother who after the death of Boris said the sacred words: "Live for me." For her work she got multiple gratitude letters from students, parents, certificates of conferring of leading worker (“udarnik”) for the building cultural sphere. When the World War II started she entered nurses’ courses and worked in the hospital. Later she got the news that her brother Alexander died in 1943 in the prison camp hospital, her heart could not stand it and soon after that news she died.

The fate of Eugene (1894 – 1973), another sister of Alexander Alexandrovich, developed more safely. She got married, had two children; in the middle of 1930s her family moved to the town called Shimorskoe. When the war began, all the relatives fled to them to find shelter and warmth.

Tatiana Alexandrovna (1896 – 1975) took over the family head role together with her daughter Zoya after the death of her brother. Their family kept living in that small wooden house not far from Moscow, where Kononenko family moved in 1930s. It was one of the reasons why all the family members yearned to be there together again. When the World War II just had started Zoya entered nurses’ courses immediately, and later found out that a special sabotage and reconnaissance detachment was formed and, without a second thought, enrolled there. Zoya, a young and beautiful girl, a Komsomol member, absolutely inexperienced, with a fierce desire to defend her homeland, she was at the brink of death many times. Her family didn’t receive any news about her, the most horrible thoughts came to their mind and then, in 1942, Zoya came back. Completely exhausted, with frostbitten feet but alive. Thanks to her commander she was demobilized and continued her studying. Zoya had a dream: to come back to her homeland in Novgorod-Seversk and to build a house there and stay to live. After working really hard she achieved her aim finally and in 1969 the house was built. Zoya did it not only for herself but also for the whole of her family, which the revolution separated from the House.

Ivan Andreevich Kononenko (1900 – 1920). Vanya grew up as a smart talented boy, but his youth fell on the revolution years. One letter from Kiev survived where he wrote that everything was going well with him, he got a job and entered the university. It is not known exactly, but most likely the flow of outgoing troops overwhelmed him, and later his family received news of his death in Paris from hepatitis. His life was cut short, even before he could begin.

Maria – the eldest daughter of Alexandr Alexandrovich (1907 – 1967), beautiful, vibrant and talented. But the Revolution sacrificed everyone and left its scar on this girl as well. When Maria was a child, during the Jewish pogrom in Novgorod-Seversk, in the house of Kononenko they hid and defended the Jews, the shots rattled around, the little girl Masha got so scared that she couldn’t feel her legs for several years. During the World War II she lost her husband who voluntarily stayed in the Blockade Leningrad to help and save citizens.

Their daughter, Elena Pavlovna Pogodina, has preserved for her descendants not only the history of her family, which in her stories, photographs and documents reflects the complex and tragic hundred-year history of our country, but also the unique collection of Boris Fyodorovich Bespalko's drawings - valuable artistic evidence of his era, the era of global historical cataclysms .Gallery QUARTA presents this heritage in the project "The Story of One Family".