Cart is empty
Cart is empty
View cart
Checkout
Home/Articles About Art/12, Kuznetsky Most: The Story of a House

12, Kuznetsky Most: The Story of a House 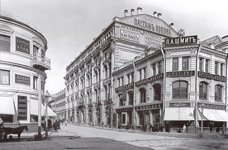 Kuznetsky Most (Blacksmith’s Bridge) got its name from the settlement of blacksmiths which was set up in the era of Ivan III who founded Pushechny dvor (Cannon yard) on the Neglinka river. The bridge that gave the name to the street was first made of wood which was later replaced with white stone, but at the start of the 19th century the river was put into a pipe, the bridge was covered with soil, the railing was dismantled, and only the name remained.

In the 18th century Kuznetsky Most was already famous for its fashion stores and exquisite French fleur, just like Griboedov once wrote: «And that’s all because of Kuznetsky Most and its Frenchmen, from there come the fashion and the authors and the muses…». The owners of the local mansions used to be the noblest names in the Russian history, from the Myasoedovs and Dolgorukovs to Golytsins and the Saltykovs. At Kuznetsky Most you could find anything: furniture, confectionary, optics. However, fashionable clothes have always been the most popular goods at Kuznetsky Most. At the beginning of the 19th century there were 18 stores offering clothes, of which only one was owned by a Russian. The narrow byway street gradually acquired its specific architectural style with the increasing number of merchant’s rows and arcades, and one of the most magnificent ones was the four-storey mansion at 12, Kuznetsky Most.

The building, where today we can find the largest scientific and technical library in the country, has a long and turbulent history. Being a private estate it had several owners starting from the 18th century: from the high ranking officer I.Verderevsky, to Count P.Sheremetev and the constructer of the Neglinny canal major general Blankennagel, to the scientist V.Karazin, who was one of the founders of Kharkov University.

The book has always been the necessary attribute of the development of the House. In 1810 there used to be Gorn’s bookshop and later the second floor was occupied by the book store of the famous Russian publisher August Semen; by the end of the 19th century the Publishing House «Tovarischestvo М. О. Volf» opened a bookshop which got the name “Writers’ bookshop” after the revolution and has remained there ever since.

In 1830s Gua’s confectionary opened up at 12, Kuznetsky Most, which was a rare phenomenon in Moscow at the time, and a department store sprang up where you could buy tobacco, crystal and other haberdashery. The long-livers of the House at Kuznetsky Most were Gresser’s music store and a family art salon owned by an Italian Giuseppe Daziaro.

The turning point in the history of the House in Kuznetsky Most was its acquisition by the tea-merchant K.Popov. Popov ordered the project to the architect A.Rezanov and built a luxurious arcade in Baroque style which became a compositional centerpiece of the street and a cultural site for many years to come. Besides various stores there were exhibitions and shows, in particular of the owner’s Oriental collection, which later was gifted to the museum of Stroganov college, and of exotic tropical plants. In 1879 a walk-through was built within the House leading to Pushechnaya street, which transformed the building into a convenient pedestrian area.

On July 1st, 1882 the House at 12, Kuznetsky Most lived through a historic moment: the first telephone station in Moscow was opened there. Only highly educated girls with the knowledge of several foreign languages were hired to work at the station.

At the end of the 19th century “Russian photographic society” occupied part of the place. Among its members were the scientific stars of Moscow University such as К.А. Timiryazev, N.D. Zelinsky, N.А. Umov and N.Е. Zhukovsky. The editorial of the first photo magazine “Photograph” also opened at the same address.

In 1899 Popov sold the House to the Dzhamgarov brothers who turned it into a bank.

At the start of the last century the House went on to expand its trade and cultural biography. The “Slavic supportive society in Moscow” was opened in the building, whose active members featured some outstanding personalities of the era, such as the writer V.Gilyarovsky and publisher I.Sytin. Another organization called “International book” appeared in the House and later turned into a bookshop with books in foreign languages known today as “The House of the Foreign Book”.

After the revolution in 1917 the building was used for the purposes of the new power: it housed a regional council, different medical courses and societies. In 1931 Bernard Shaw came to meet Soviet writers there and in the middle of the 1940s the building welcomed the renowned Fashion House “Kuznetsky Most” which created design for 300 Soviet factories and revealed to the world the first Russian couturier Vyacheslav Zaitsev. Finally, in 1958 the State public scientific and technical library was opened in the House.

In 2005 the government decided to reconstruct the former “Popov’s Arcade”. Its magnificent façade by A.Kaminsky overlooking Pushechnaya street is supposed to be put down and replaced with a replica. However, the amazing House at 12, Kuznetsky Most, which survived the fire of 1812, the Revolution and endless metamorphoses of the time, manages to keep its spirit and atmosphere which have for many centuries attracted the guests and the residents of the capital city. There are offices and Museum of the Soviet Slot Machines inside of the building and art-space ARTIME.CLUB: